All About the Camera

Holly wanted me (Wade …. her husband) to write this post for her because a lot of folks have been making the same comment.

“Your photos are not nearly as bad as they used to be. What happened?”

As it turns out Holly and I both used to like photography a lot. I worked in a darkroom at the college newspaper for quite a while and Holly shot a lot during her international travels as a teenager. Then we got married and forgot about hobbies that didn’t include repairing old houses. In fact the first 4 years of our marriage were documented by a variety of low quality point and shoot cameras which worked fine for us. But when Alex arrived Holly wanted to have nice pictures for her blog and to share with our family far away. So I got the job of buying a camera…

I had a Canon Digital Rebel with a decent lens but it was old and had some issues with the sensor. Luckily we had a photographer friend who was upgrading her gear. So we ended up buying her secondhand Canon 5D (not the newer 5D Mark II). It is a digital SLR camera which means you can switch out the lenses. The 5D is a nice camera which has lots of fantastic features that we are only beginning to learn. But the real trick to getting it to take nice pictures it to invest in a high quality lens.

Most consumer DSLR cameras come as a kit which include a few low end lenses. These lenses usually have a high f-value, something like 3.4-5.6. Generally speaking the f-value is the amount of light a lens allows through to the camera sensor. Lower numbers allow more light in. The benefit is that pictures can be taken in lower light without a flash. They have richer colors. And at very low f-values you get a shallow depth of field which means your subject is in focus and the background is nice and blurry. These type of pictures can look really great.

So along with the 5D we purchased a Canon 50mm 1.4f prime lens. A prime lens is one set to take pictures at a particular zoom. So if we want to get a close up of the boy we have to move the camera close to him. Although this is a drawback, the 1.4 f-value makes for some wonderful images especially indoors without a flash. 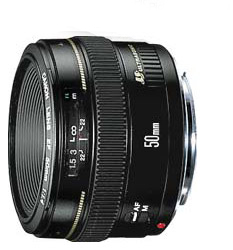 We have loved this camera and lens but there are times when it is difficult to work with. Shooting at a low aperture setting (f-value) results in a very shallow depth of field so often times parts of a picture are not in sharp focus. And if something is moving during a dimly light shot, the picture gets motion blur. So for Christmas Holly and I got a Canon 580EX Speedlite. This is a flash that mounts to our camera body and has been great especially for indoor shots.

Next up we are planning on getting a Canon 24-70mm 2.8f lens. This is considered one of the best all around lenses. And best of all we can finally zoom in and out!