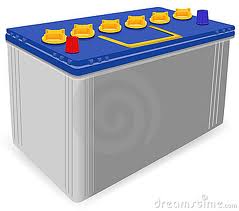 Last January I took my car in for a regular oil change (yes this is at a dealership). The man came out and told me my battery was testing bad (he reiterated that it wasn’t testing low but bad). I thought about it for a second and was pretty sure Wade had replaced the battery within the last 6 months. I told the man that I thought it was under warranty somewhere else and would take care of it. He seemed very concerned that I not stop anywhere on the way home and take care of it immediately. Wade took it in to the auto store he bought it from and it tested fine. For the last year every time I go in for an oil change they tell me my battery is testing bad and get almost mad when I brush them off. The last time I went in I told them before giving them my keys that my battery would test bad and had done so for a year. The man eventually comes out with an odd look on his face. He tells me that they used both battery testers and my battery tests at the equivalent of a lawn mower battery. Then he tells me that my car starts fine – which I know.